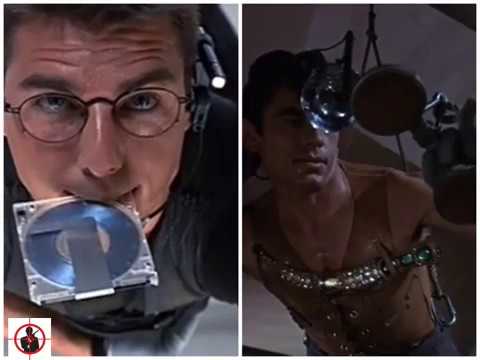 Do you remember the famous Mission: Impossible vault scene?  Ethan Hunt is lowered into the vault from the ceiling.  He must deal with alarms and sensors.  Where did they get that idea?

The scene obviously pays homage to the 1955 movie Rififi and the 1964 movie Topkapi.  Therefore, we must look at this scene’s pedigree.  We look at each movie’s version of the scene and then show them side-by-side.  As you move from the older Rififi to Topkapi, the idea really takes shape.   The technology used isn’t fancy in those first two movies.  However, the vault scene gets modernized in Mission: Impossible.

It’s really cool to follow the idea for this scene from it’s early inception up to Mission: Impossible (1996).  This is spy movies and action movies at their best!