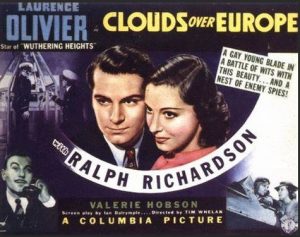 Join Dan and Tom as they Crack of Code of the history that surrounded & impacted directly the making of the 1939 movie, Q Planes (Clouds Over Europe).

Our first podcast on Q Planes called, Q Planes (Clouds Over Europe) is an analysis of the movie, scene by scene.  In this new podcast, a different approach is taken, looking at historical events (the oncoming of World War Two, etc.) that directly affected the making of the film, looking at some very interesting connections!

The real world does find its way into spy movies!

Some of the items we discuss are: