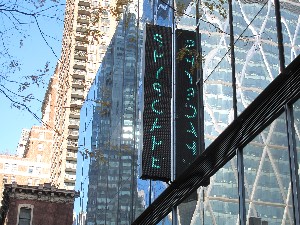 Join Dan and Tom – as Dan details the fascinating SPYSCAPE Spy Museum in New York City and interviews Ian Oldaker, the museum GM, as they tour the museum.   This is an interactive museum, not just exhibits, with lots of real spy gadgets, an Enigma machine . . . and an Aston Martin from Goldeneye!  And you can test your spy skills in 7 different galleries!

Fun stuff – take a listen now!  And Subscribe (follow) our channel, Cracking the Code of Spy Movies to get the latest!  It’s FREE!

Video: You can view our video tour of SPYSCAPE here

Dan Silvestri:                      00:01                     You’ve seen a lot of spies in action in your favorite spy movies. Have you ever pictured yourself as one? Ah, now you can discover your inner spy skills at the SPYSCAPE museum in New York City, which we just toured. This is Tom Pizzato and Dan Silvestri. Join us as we’re Cracking the Code of Spy Movies. Check us out on our website  spymovienavigator.com — the worldwide community of spy movie fans — spy movie, podcasts, videos, discussions, and more. Please subscribe to our show through your favorite podcast app.

Dan Silvestri:                      01:44                     So they missed that ship or they canceled it and they got on another ship. So they got on another ship and he’s like, okay. And we’re looking up the names and there are all kinds of crazy names. His name was Giovanni Silvestri. So there were a couple of Giovanni Silvestri’s. He was from our Arnara, Italy and there were a couple of people from Arnara, Italy there, but there was one that was spelled all kinds of crazy names. His name was Giovani Batiste Silvestri so there is one, that’s like C I O G. dot. Batisto something: Batigo, that’s what it was: Batigo.  He said: click that. That’s probably because they wrote down whatever they thought they heard. So we clicked that and it is him. And he says, Oh yeah, he came in from 1910 he actually stayed with, it looks like a cousin, Luigi. And I said, do we know where he stayed: the address?

Dan Silvestri:                      04:47                    And the 146 building is standing in front of us. There’s a restaurant on the first floor. It was closed at the time cause a fire. So he said, this is the building your grandfather within this building was built in 1900 and this restaurant opened in 1902. It’s like Holy geez. So I’m thinking this is pretty cool. So I took a bunch of pictures of the building and everything else, which is kinda neat to find this kind of thing. And then he was really nice. Uh, but he, but he was talking a little bit about that and he said, where you guys from, I said Chicago and he mentioned some Italian restaurant in Chicago or whatever. And he said you know that they, I said, yeah, we know that place. I know that place. I grew up in that neighborhood and I actually went to school with the kids who were running the restaurant now, and he said, “get outta here.” He actually said something a little more,

Ian Oldaker:                       08:02                     You gave a great lead-in it’s a different type of museum where a contemporary museum, a brand new innovative brand that really looks at, um, skills of a spy and how each person has those types of skills and can discover them on their own. All of our, all of our exhibitry, tries to take you on a personal journey where we expose you and teach you new things that you didn’t even know you had and how those things might be applicable in the spy world.

Ian Oldaker:                       09:29                     So our galleries are set up with seven different themes and each theme is a different spy skill. And we start with encryption. So in the first gallery, you’re going to be testing your cipher skills and you’re deciphering skills. In the second gallery we look at deception and you literally are going to learn how to lie and spot liars, Third gallery, we look at surveillance and your ability to look at a surveillance room wear a headset answer, questions, and your powers of observation are really tested. Then we look at hacking and we look at three types of hacking, gray hat, white hat, black hat. And we sort of give you an overview of the different worlds and the roles in hacking. And then we take you into the special operations area.

Ian Oldaker:                       11:42                     There’s no right or wrong. Everything basically puts you in a range where you find out how your personality, your skills would measure up in the spy world. And we basically assign you one of 10 different archetypes. The profiling system looks at your scores as you go through all the galleries and then matches those scores with an archetype. And the archetypes can be a spymaster. They can be counter-intelligence officers, special operations officers, or hackers.

Ian Oldaker:                       13:55                     I’ll give you two examples. Some of it is just how to approach cybersecurity and your own personal safety with the privacy of your data. Who’s looking at your data and how you might be a little safer and guard your data. And the other thing is something as simple as our lie detection challenge. You might learn something about how to spot a liar, like whether they have a quivering lip or they’re touching their face. You never know in a conversation, you might spot that in somebody who’s telling you something and think about it a little bit differently.

Deception Voice:              20:27                     Now remove your finger from the sensor. Analyzing results. Smiling or laughing can suggest you feel nervous or uncomfortable about the question you’ve been asked. Lying can often be stressful and people tend to blink more when they’re stressed. Before we begin the next part, here are some other signs of lying: Pursed lips. This is Anna. The FBI has her in for questioning. She’ll be presented with a series of suspects and asked if she knows any of them. After each answer. Press red. If you think she lied, press green. If you think she told the truth.

Dan Silvestri:                      23:56                     Yeah. This is the real DB 5 from GoldenEye, one of the two surviving cars. One of them was smashed up pretty much in the movie. This one survived production and SPYSCAPE museum here in New York bought this DB 5 from GoldenEye for about $2.6 million it looks like from an auction. So this pretty cool actually looking at the car, looking at, I know we’ve seen photos of Pierce Brosnan leaning against the right headlight and so on. I’m standing right there. This is, this is great. This is one of the best, of course, iconic cars of James Bond and they have one here at the spy museum. One of the highlights of the Bond exhibit here.

Dan Silvestri:                      24:42                     Great stuff. Ian mentioned the Special Operations Room. This is kind of fun. This is where the laser tunnel is. And I tried it out. Of course, I wasn’t recording as I was doing it because you have to actually maneuver over lasers. Like if you’ve seen the movie Entrapment or Mission: Impossible. These are movies that use these laser kinds of tunnels where they’re protecting a particular device or machine or intelligence or data. And so this one you get to actually do it and see how well you do. I did okay (laughs). But this is one of the highlight galleries, so definitely make sure you spend some time here in the Special Operations Room and the laser tunnel. Great stuff. Fun, fun, fun. I finished up my tour of the SPYSCAPE museum by running through the Intelligence Gallery. That is pretty cool cause they got real spy stuff there like Ian mentioned. Different kinds of, of things like buttons that you could hide microfilm in and different kinds of real gadgets that came from the real spy world. So that’s really one of the fun galleries to look around for real stuff. And then lastly, you go to your debriefing and then you put your tag in again, you log in with your bracelet and you get your debriefing and your classification. So all of this is just fun stuff. It’s a great place. I would highly recommend coming to SPYSCAPE Museum in New York City. It’s a lot of fun. It’s interactive, it’s constant fun the whole time you’re here. We talked to a bunch of people that really liked it and I would say check it out. SPYSCAPE museum, spyscape.com New York City: Spy Movie Navigator loves it. Remember at the SPYSCAPE museum, it’s all about YOU.