The Silent Enemy (1958) – A Thunderball Inspiration? 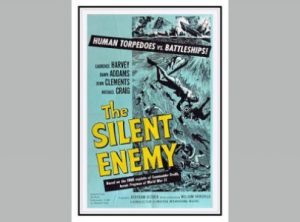 Dan and Tom dive into The Silent Enemy, a 1958 World War II spy movie, that has lots of connections with the 1961 novel and 1965 film, Thunderball!

The Silent Enemy, while not a documentary, looks the deadly human torpedoes that the Italians created in World War II. We see how the British learn to deal with these deadly weapons. They need to figure it our in order to protect Malta. Explore this great film and all the connections to real-world events and Bond movies!

In this podcast, we examine: