You know, Goldfinger was released in December 1964 in the USA, in New York, then Hollywood. Its general release was January 9th.  This was the third EON Production James Bond 007 film released.  And this is the beginning of the background of SpyMovieNavigator.com

How We Got Hooked On Spy Movies

Well, Dan was back in high school then, but he and a few buddies wanted to see Goldfinger.

Dan literally lived about 6 or 7 blocks from his high school.   It was an old Italian neighborhood, that was maybe a few miles from downtown Chicago. So, one day, Dan and his buddies executed their own spy missions – they cut class – thinking they were very clever.  They took the bus to downtown Chicago and saw Goldfinger! Loved it – loved everything about it, hooked on Bond early!   But, the only flaw in the plan, was the guy who was supposed to cover for us.  He was to doctor-up the attendance sheets, but he chickened out. So Dan and his friends got caught by the school, who informed their parents.  Yeah,  they got punished by both – but oh my – but was it ever worth it!

Secret Agent and Spies on TV

Truly, “The Saint”, which starred Roger Moore, and “The Avengers,” which starred Diana Rigg have obvious connections to later Bond films – Roger Moore of course becoming Bond for 7 movies, and Diana Rigg as Tracy di Vincenzo who marries Bond in On Her Majesty’s Secret Service.

Tom also liked some of the TV shows around that time frame.

Bond in the 60s was dominant. People read the Fleming books and waited for the next movie.  In the US – President Kennedy at the time, put the Bond novel, “From Russia With Love,” on his Top 10 favorite book list – which made the Fleming novels explode in the US.

The background of SpyMovieNavigator.com is building!

We read all the Ian Fleming novels on Bond too. In fact, just recently we visited The Lilly Library at Indiana University where they own 11 of the original Ian Fleming Bond manuscripts. We were able to spend one and a half days examining hundreds of type-written pages by Fleming, along with his ink corrections, changes, name changes, title changes and more. On one page, “Miss Pettavel” was scratched out.

Ian Fleming based the name Pettavel on a real person he knew, named Pettigrew. But when he scratched it out . . . he penned in, “Moneypenny!”  Oh my God – here the name we all know and love was first introduced into the Bond novels!  That was a genuinely remarkable experience touching the pages of Bond as Fleming wrote it.

We would highly recommend a visit there for any spy movie fan, but especially for Bond fans. Remarkable! A guy had been there a few months before us going through all the manuscripts looking for what watches Bond wore.  And then wrote an article on timepieces that was an international hit.

The Seed of SpyMovieNavigator Takes Root

The seed of SpyMovieNavigator was planted . . . . not that long ago – Tom and Dan went on a trip a while back to Switzerland, Luxemburg, Belgium and then to Normandy in France, to the beaches of D-Day. As an aside, everyone should set foot on the beaches in Normandy to realize what the allies sacrificed for the freedom of the world. It is moving, touching, heart-wrenching.

While in Switzerland, Dan and Tom spent a week traveling all over by train and cable car.  Touring Zurich, Geneva, Interlaken, and we then went up to Murren, (about a 5,300-foot elevation), up into the Swiss Alps. Long, beautiful cable-car ride up, then a small train to the town with gorgeous scenery all around. It was like being in a National Geographic magazine. Just spectacular beauty!

Tom loved the cable car –not!  A little height-challenged for the first big ride, while Dan was up taking photos, Tom was in the middle of the back seat staring straight ahead. But after a few more cable car rides, he was fine!

We can see, around the area were beautiful little towns, like Lauterbrunnen, Grindewald, Trummelbach Falls, and Schilthorn. Well, Dan and Tom were now close to some of the action from On Her Majesty’s Secret Service (1969).  That was the 6th EON Productions James Bond 007 movie.  Remember the car chase where Tracy drives her red, 1969 Mercury Cougar XR-7, with Bond as a passenger through the stock car race on ice and snow?  They are trying to escape the henchmen of Blofeld.  Well, that took place right in the parking lot area of Lauterbrunnen (in the Bern region)! That was a small cable car ride so we went! And immediately we thought, this was very, very cool to be on the location of a Bond film scene.  And from one of our favorite Bond movies.

Also, we took another small cable car down from Wengen to Grindelwald. And the wind was swaying us around a lot as we descended, In fact, when we got to the station, we got out and they closed the lift because of the wind! But we got to the spot where the ice rink was that where Tracy, who was skating, meets up with Bond, who was sitting on a bench, in On Her Majesty’s Secret Service.

Very Bond-like – we escaped with our lives, as the background of SpyMovieNavigator.com continued to build!

Only in Murren for two days, the stay at the Eiger Hotel was terrific. Beautiful views, great restaurant, nice little bar. Finding out that some of the actors and crew hung around here during filming and had a few cocktails and gambled a bit playing cards with each other, they too had to, of course, dine there and sit at the bar and have a few cocktails.

The lift was closed that went up to Schilthorn due to bad weather. Piz Gloria is up there – the Blofeld headquarters where he has his “allergy research institute” but where he is brainwashing women who will deliver a deadly virus to the world.

Disappointed it was inaccessible, Dan and Tom were vigilant – watching around the clock when it might open again – they had monitors in the hotel lobby that tracked the status of all the cable lifts. In the morning it did open, and off they went up to Piz Gloria at Schilthorn – another 4000 -5,000 feet up!

At Schilthorn, a lot of action took place in On Her Majesty’s Secret Service – the Blofeld headquarters, the outdoor section where the women were curling, and where Bond tried it and slipped, and where he later slides as he is shooting Blofeld’s henchmen during the assault on Piz Gloria by Bond and Draco, inside where Bond walks up the steps with the gold, ornate metalwork making a barrier to the stairway he ascends!

OK, now we are hooked. From this moment, Dan and Tom thought tons of people around the world who are spy movie fans would love to be here – and here they were – in the thick of it! One of the Top 10 Bond film locations in the world! So, as the wheels turned on the cable car ride back down, they also started turning for SpyMovieNavigator.

Hook, line, and sinker. For these reasons, the growing background of SpyMovieNavigator.com is compelling us to do something with spy movies!

In the Caribbean, Tom with his family had visited Dunns River Falls in Jamaica, and separately, Dan had visited with his family and climbed the falls. Very cool again to be in such an iconic spot from Dr. No! where Honey Rider and James Bond were standing!

After Switzerland, Now What?

So after our Switzerland trip, we thought we’d do an exploratory trip to a few other spy movie locations. So recently, we headed to Portugal, Sardinia Italy, Amsterdam and London to visit a few more film locations! On that trip alone, we got to over 50 Bond and spy movie locations.

We met with Caroline Munro, who played Naomi, the assistant of Stromberg, in The Spy Who Loved Me. Naomi also comes to collect Bond, who was posing as an oceanographer – Mr. Sterling, to bring him to Stromberg.  And she pilots the helicopter and tries to shoot Bond as he escapes in the Lotus Esprit – shortly thereafter, becoming the first woman Bond kills in the movies!

On More Spy Movie Locations in the World – Round 2

This trip was spy movie heaven. In Portugal, we wanted to visit the rest of the major scenes from On Her Majesty’s Secret Service, and so we set out to find all the key locations. So in Lisbon, 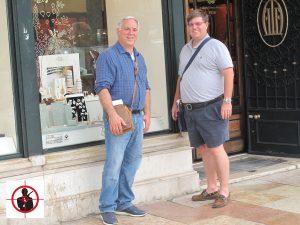 OK – we are in as deep as we can get and there is no getting out!  This trip added several new sprouts on our background of SpyMovieNavigator.com.

Did you ever take a look at YouTube for a particular spy movie of interest?  Well, check out Dr. No on YouTube.  There are literally dozens, maybe even hundreds, of clips on this movie alone, and the same is true for dozens and dozens of other spy movies. So you can spend a very long time finding meaningful clips about the movie, and when you do, they are scattered all over the place in random order.

As a result, here is what we are doing with some of the best spy movies, on our website. We are “curating” spy movies, from the main spy movie genres – Bond, Bourne, Mission: Impossible, and The Best of the Rest.

How We are Actually Curating Spy Movies

We are scouring through those YouTube clips, finding the best ones that represent key scenes in the movies (not the whole movies of course), assembling them in chronological order as they would appear in the film, then include our editorial comments, insights about why this scene is important to the film, how this film or scene impacts other spy movie films or scenes to follow, and how other spy movies or real-life incidents that preceded these movies may have influenced the film we are looking at.

So you can go to any genre category, like 007, Bourne, Mission: Impossible, of the Best of the Rest category and see the clips, and read the editorial commentaries and insights for each clip. If you’re a spy movie fan, we know you will love this approach. Of course, we always look for your insights as well and will promote the exchange of ideas via forums and our Facebook chats. We may even use your insights on the site!

The End of the Beginning!

In short, we will all learn something new from the “curated” films, which is a unique approach to looking at spy movies in general. We are building a Worldwide Community of Spy Movie Fans and you’re invited!

Your participation in writing articles, uploading locations photos and videos is all part of growing this community.  So join in now!

We hoped you enjoyed this little background of SpyMovieNavigator – please continue to visit our website, download our podcasts and participate regularly!