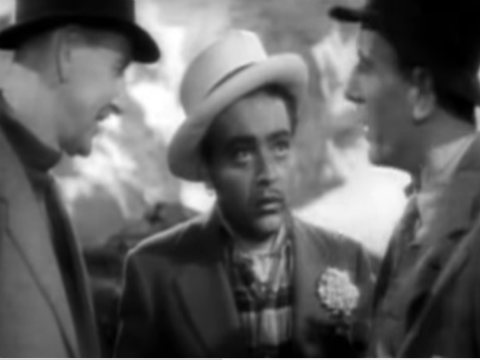 Upon exiting, he reads the note, which is in German and translated for us; “Novelist Brodie Reported Dead arrived To-Day Hotel Excelsior On Espionage work Take Steps.”

The next scene finds Brodie and The General in a dimly lit church, and Brodie instructs The General to light 3 candles as the code signal. They hear organ music and find a man slumped with hands on the keys. He has been strangled. That may have been their contact, who is now silenced. They find a button in the dead man’s hand – indicating a struggle and they now think whoever owns the button is the killer and the man they are after.

They get out of the church and return to go the casino, and Elsa is with Marvin again, at the same party. Marvin is charming her and talking about having children with her when they settle down. There is always this playfulness between them, as we see between Bond and Miss Moneypenny all the time. Similar. There is a button on the roulette table, and Marvin says to a man standing there “that belongs to you doesn’t it?” And he checks – and there is one missing from his jacket. Ashenden is convinced that is their man, and the man is leaving in 1.5 days.
While dancing, Ashenden and Elsa talk, and realize this is a murder mission, and not fun as she thinks. They become morose.

Marvin and Elsa are back at the hotel, with a German woman, and the dog who the suspect owns, while Ashenden and The General are going to climb a mountain with the stranger who they think is the German spy, but appears English. The General plans on killing the suspected man and pushes him off the mountain. Of course we will see many mountain scenes in future spy movies, like The Spy Who Loved Me (pre-title sequence, wherein the ski chase scene Bond skies off a mountain and then opens his parachute), SPECTRE (filmed in Solden, Austria), On Her Majesty’s Secret Service (Piz Gloria, Schilthorn, Switzerland), For Your Eyes Only (the assault on Meteora, Greece), Mission: Impossible 2 (the Rock Climb), and many more.