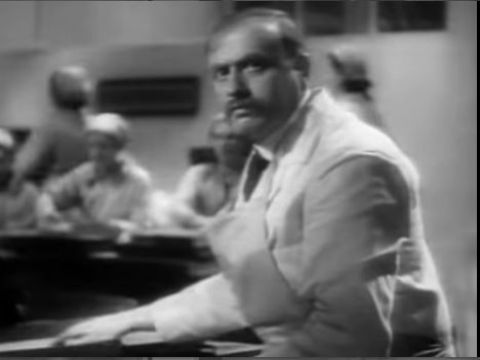 Seemingly taking a tour (which is confusing), and one worker looks suspiciously at him and The General, as he is packing up something. The General sees a lot of documents going up a conveyor and climbs some spiral stairs to see a worker open up the document which says: “Two English spies here. Phone police anonymously.” The worker indeed phones the police.

In the meantime, Else leaves a note for Ashenden back at the hotel: “It was nice of you to pretend to me last night – but I see you cannot give up this job. You will be better without me. Goodbye. Elsa” And she packs to leave.

Back at the post office, a woman talks to another worker as she looks at the two spies (Ashenden and The General). The General sees out the window that the police are coming and informs Ashenden. The General then fakes getting ill, Ashenden hits an alarm which sends the whole place into a panic and everyone is evacuating, which provides a cover for their escape. As Ashenden and The General are running through the post office, one man is in pursuit – who The General punches in the face. It turns out this guy is trying to help and gives them a note: “Baron Stecker nach Damaskus ueber nich nennt sich Marvin”. They now know the spy is actually Marvin!

We see Elsa is checking out of the hotel and sees Marvin checking out as well, who says he must go to Greece. He leaves a photo of him with her, in which he has a funny mustache. She has no idea where she is going, but says “I’m leaving too.” She has no husband anymore and wants to go with Marvin. He agrees. About the same time, Ashenden calls the hotel and finds out Elsa left with Marvin.

After some other action, we see Ashenden and The General at the train station, figuring that’s where Elsa might be. Elsa and Marvin are about to get on the train, when Ashenden sees her – she runs to him, and wants to go back, but no more killings, etc. Ashenden asks Elsa, “How did you find out Marvin is the man we are after?” She did not know! The train is heading to Constantinople, enemy territory.

Marvin is on the train. In the foggy mist, Elsa, Ashenden and The General get on the train. Elsa does not want Ashenden (Brodie) to kill Marvin. She was going to tell Marvin who Ashenden really is. They look and see 3 spies hanging, dead, outside the station.