James Bond and Karim at Cistern - Bond heads to Istanbul to meet Karin Bey the MI6 agent in Istanbul, and to talk about meeting Tatiana Romanov (who thinks she is working for Russia under Kleb who has defected to SPECTRE) who can get the Lektor. After a bomb goes off in Bey’s office, and he is wondering why the Russians are acting like this, Bond tells him maybe it is because he is here.  Once again, where is all the clandestine cover?!  Then SPECTRE will steal the Lektor and sell it. Here, Karim Bey takes Bond beneath his offices and to the underground cistern where he uses a periscope to spy on the Russian embassy.

James Bond and Karim at Cistern

This location is actually near the Aya Sofia Mosque. There is an entrance fee, but when you enter, you walk down the steps that Bond and Karim walk down in this scene. Very cool!

Again, one of our colleagues got these actual shots for us at the Cistern!  Beautiful! [caption id="attachment_3131" align="aligncenter" width="300"] 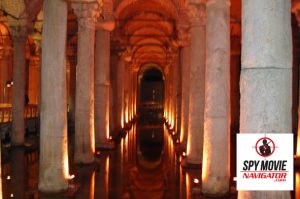 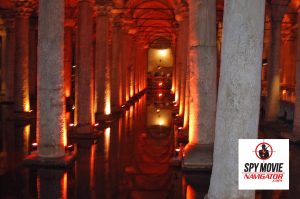 Bond and Bey in the underground Cistern built in the 1600s, on way to spy on Russian Consulate.[/caption] Kerim Bey is played by Pedro Armendáriz, who is flawless.  He was suffering from cancer during the filming of From Russia With Love (one of the reasons he is limping in a lot of scenes).  But he wanted to complete it.  He ended up committing suicide not long after the filming was complete, knowing it was just a matter of time for him to die from his cancer.  Very sad.   He was tremendous in this film.  His son, as a tribute, later appeared in Licence to Kill in a small role. Also, Kerim's lover in a scene when the bomb goes off in his office, the one who calls him away from his desk, saving his life, Nadja Regin,  passed away in April 2019.   She also appeared in Goldfinger, as Bonita, the belly dancer.