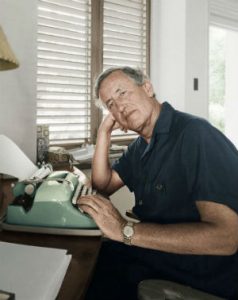 Dan and Tom of SpyMovieNavigator.com had the privilege of examining 11 of Ian Fleming’s original James Bond manuscripts – his actual typed pages, with hand-written edits in the margins, crossed-out sections, add-ins and more!  You can see where he changes a name we all know, and then – there it is in the final published version of the novel!
Come with us to The Lilly Library at Indiana University in the USA, as we examine, in-person, all of these wonderful James Bond masterpieces, gaining some insight into the novels and into Ian Fleming’s way of writing!
This is Part one, covering Casino Royale to From Russia With Love, of a 2-part series!  Look for Part 2 as well!”

How would you like to touch and examine the actual pages that Ian Fleming typed when writing his James Bond novels?  Well, we did and here’s our story!

Hi, this is Dan Silvestri and Tom Pizzato from SpyMovienavigator.com – the Worldwide Community of Spy Move Fans – spy movie podcasts, videos, discussions and more!  If you like our podcasts, please give us a 5–star rating on iTunes and in Google Play – that helps us a lot!  Like us on Facebook, Follow us on Twitter and on Instagram too.  And when you have feedback, an idea for a podcast, something you want to say – just click the red button on our website that says “Send us a Voicemail”, or send us a message and we may include it on our show!

We like traveling, hunting down spy movie filming locations and other significant places that played a part in spy movies.   Like, when we were in London not too long ago, we stood on the steps, and at the door of Les Ambassadeurs in London.   Of course, we know that is the casino that Bond is playing baccarat in at the beginning of Dr. No – where we first meet Bond on film, and with his now-famous, “Bond. James Bond” introduction to Sylvia Trench and all of us!  It’s also when Ian Fleming met with some of the EON folks early on to solidify a deal to turn the books into films.

Well, how about visiting a place that owns 11 of Ian Fleming’s James Bond novels?  Type-written pages that he typed at Goldeneye in Jamaica!  With Ian Fleming’s hand-written notes, deletions and additions, edits in blue ink?  Well, Indiana University in the State of Indiana in the United States has a special library called, The Lilly Library – and they have the manuscripts!

The maddening thing is that this is where I got my undergraduate degree.  I knew the library existed and that is was a rare book library.  I knew it had part of the Gutenberg Bible.  They have the letter with George Washington accepting the first presidency of the United States.  I just knew it as a rare book library and never went in there in my four years of study.  Now I find out it had 11 James Bond manuscripts typed and hand-written by Ian Fleming?   What better reason to go visit my alma mater, read the manuscripts and get a chance to see if Mother Bear’s pizza is still as good as I remember (it is).

Only a four–hour ride for us, we drove down and spent a day and a half pouring over all 11 of the manuscripts.   We photographed every page of Casino Royale, the first novel.   We are trying to get permission to post some of these pictures.   We were able to turn the pages of each manuscript with ungloved hands – touching the very pages that Fleming typed in his typewriter in Jamaica.  And examining every edit he made in all 11 manuscripts.

This was a thrill beyond belief!  If you are a spy movie fan, and especially as a James Bond fan, we would highly recommend this.   When we drove down there, parked the car in the nearby Student Union parking lot, and were walking to the door of the library, our hearts were racing!  We walked in, signed in, and went into the special room where they brought the manuscripts – from the vault!  SpyMovieNavigator was about to examine in person, the original manuscripts!

One quick note:  you need to make a reservation for the reading room which you can do online at https://libraries.indiana.edu/lilly-library . You request what you want to read.   We allocated a day and a half and really could have used 3 – 4 days in order to go page-by-page with the manuscript and the published book.

They brought each manuscript out, 2 at a time – one for Dan and one for Tom.  They set then on foam rubber stands that allowed the book to sit there, opened, on an angle so you can read, and easily turn the pages.   We were not allowed to pick up the books, and of course, not to make ANY marks on these valuable pages.

Here are the manuscripts that they have.   Now, keep in mind, there may be other editions of these drafts – because there were some things in other drafts that made it into the books, and so on.   The only novel they don’t have is his last one, The Man With The Golden Gun. They don’t have Thunderball either, but that was based on a screenplay that was credited to Kevin McClory, Jack Wittingham, and Ian Fleming.  But that’s a different story we won’t go into this podcast, maybe a later one.

Here are the 11 they have and we examined:

Fleming used a lot of inserts to make changes.  Sometimes these would be written on the back of the previous page.  Other times they were typed and either inserted or pasted on the page.

We’re just going to go through a few of the highlights of paging through these manuscripts, book by book.   We can talk for a couple of hours about this great outing!