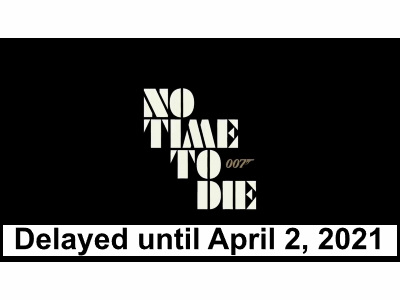 The Bond Hype Machine WAS Cranking! And has come to a grinding halt!  Here’s our Special October 3rd, 2020 edition of Spy Movie News with the disappointing announcement of the delay of No Time to Die again with some fan reaction!

NO TIME TO DIE – DELAYED AGAIN 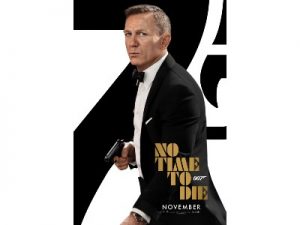 Well, It’s still No Time to Die!  As announced October 2, 2020:        In our last Spy Movie News it was looking good for a November 2020 release date, but MGM, Universal, and Eon Productions have decided that based on the current potential worldwide theater situation, and the fact that probably only 22% of the global theater-going market was comfortable going back to theaters, the delay makes sense. Disappointing for sure – NO TIME TO DIE will be a year and a half after the initial planned release when it finally comes out.   Here is to hoping that by March 2021 things are looking up for this global pandemic.  We hope that it is behind us for the most part – or . . . who knows what else might happen.   Hope for the best! Fan reaction: from the @007 post about the delay on Twitter: One very clever post, which added some humor to this dreadful news, was by a “Simon Hinks”

If other Bond movies took this long to be released what would they be called?

Another amusing one was. “And if you put YET another trailer.... then we have seen all the movie so STOP PUTTING OUT TRAILERS . . .” Many posters said to release it on-demand and we’ll pay a lot of money!  There were a lot of posters with this sentiment. Certainly, the studios and Eon did all of their homework about the numbers if delayed again versus releasing it on-demand.   Sure, it’s not the same seeing a major motion picture on your own home entertainment system, but lots of posters are calling for this instead of a delay.   Can this happen?   If April is not significantly better regarding this pandemic, maybe it will.   There were many, many sad and unhappy posts regarding the delay.   Many posts were supporting the decision as well, but naturally, many fans are disappointed.  A lot of the posts asked why all the marketing hype over the past week with the Official James Bond Podcast launch, the Billie Eilish video release, and more.   But, who knows when the final decision was made?  And, importantly, we will see more hype for the film to keep people’s interest high.  So, we aren’t surprised by the hype this past week or so. 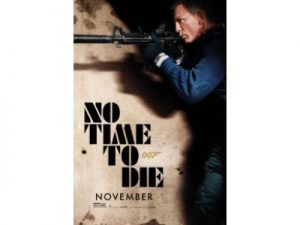 But some of the most poignant posts were from cinema workers and the fear of now what might happen to the cinema theaters without this monumental release, and to their jobs.   These posts are heart-wrenching – as the decision truly affects the lives of some people. And some fans posted that they were willing to go support their local theaters just to help keep them going and all.  They said things like: For us fans, yeah, there’s another delay.   For people in the theater industry, they have more to worry about. So, we must keep things in perspective. Some fans were just complaining that this is all about money – the studios and Eon want bigger audiences, which some said, “was shameful.”   Wow - there are a lot of emotions involved here. But ultimately, these decisions are made based on the worldwide opportunity to make No Time To Die as successful at the box office as was Skyfall (which was over a billion US dollars worldwide).   It is money that drives this bus. We shall see how this all pans out.

JAMES BOND – WHO WILL BE NEXT?

And will he still be young enough when No Time To Die is released?

According to this article on CinemaBlend.com, Tom Hardy is looking good!   So good, in fact, that betting has been suspended!  Yeah, you can bet on just about anything, and there were lots of bets placed on who will be the next James Bond! Right now, Tom Hardy seems to be the favorite.   Of course, there is no way the MGM or Eon would be announcing the next James Bond before the release and run of No Time To Die, Daniel Craig’s last outing as Bond. Sure other names have surfaced, like

But the odds are with Tom Hardy!  And as we know, these things can change in a heartbeat, so at this point, it all we know is the odds-makers and betters see Hardy in the lead spot. We won't hear anything for a while.   But, I was cleaning up some old stuff and ran into an article about Sean Connery in the 2000 January/February edition of Modern Maturity.  When Connery was asked what’s the secret to Bond, he replied, “The person who plays Bond has to be dangerous.  If there isn’t a sense of threat, you can’t be cool.” Connery as Bond was dangerous and cool!   So, what are your thoughts on Tom Hardy?

Henry Cavill seems to be jealous that he is not part of Mission: Impossible 7.   He loved working with Tom Cruise on Mission: Impossible – Fallout.  This, again, is according to this CinemaBlend.com’s article by Mike Reyes. But, as the article states, his character August •%09https:/www.cinemablend.com/news/2555807/why-mission-impossibles-henry-cavill-is-very-jealous-of-mi-7-filming-right-nowWalker, got killed off in Fallout.   Ah, well.  But as the article also states, and as we have said here at SpyMovienavigator.com, anything can happen in fiction!  Write it and it is done!   There are ways to bring back dead characters if you want to! Still, Henry Cavill has thrown his hat into the James Bond ring as well, as we mentioned.   Wow.  As the betting list indicates, he isn’t even in the Top 10!  See this article by Katherine Webb on CinemaBlend.com for more details.