Here’s our Spy Movie News for November 30, 3021!  The King’s Man is coming, Christmas gifts, No Time To Die box office performance, The ROCK as Bond?, More Red Notices?,  Mission: Impossible 8, “The Night Agent”, “A Spy Among Friends”, and more No Time To Die News – Craig wanted what?

What Spy Movie Fans Have to Look for in December 2021

We’ll start this newscast by telling you about two things happening in December 2021:
First, The King’s Man gets released on December 22nd.  This is the prequel to the first two Kingsman movies.  To help with the hype, another trailer has been released. You can find it here on YouTube.  We’ll have our no-spoiler, quick-fire review of that movie out by Christmas. We’ve been waiting for this movie which was delayed due to the pandemic.

And second, just in time for Christmas, No Time To Die will have its home release on December 20. It will be available on DVD, Blu-Ray, and 4k Ultra HD.

According to an article on DigitalSpy.com, “The home release comes with more than an hour of bonus content that delves into the action, spectacle, and stunts of Daniel Craig’s final Bond outing, while the 4K release has the Being James Bond documentary and four exclusive featurettes.”

No Time To Die has overtaken Fast & Furious 9 for the Hollywood box office lead for 2021.  It has grossed $734 million at the global box office, with 21% of the revenue coming from the domestic (US) markets. We’ve talked about the importance of the non-domestic box office for Bond in the previous podcasts.

It is still behind Chinese movies Hi, Mom and The Battle of Changjin which are at around $882 million for 2021.

So, domestically here in the US, this movie has slipped a bit in terms of its US percentage.  That was one of the risks of releasing during the pandemic. In fact, an article on Forbes.com says that No Time To Die has broken an odd box office record.  When it crossed $700 million worldwide, it had only pulled in $150 million US/domestically.  It now has the honor of having the lowest domestic gross of any movie that has pulled in at least $700 million worldwide.

Billie Eilish and Finneas O’Connell have a follow-up to winning the 2020 Grammy Award for Best Song Written For Visual Media for “No Time To Die”.  The same song won Billie Eilish and Finneas O’Connell the “Song- Feature Film” award at the Hollywood Music Awards. You can read more about this on Variety.com. Could this be a foreshadowing of the upcoming Academy Awards? Nominations will be announced on February 8th.

The Rock as James Bond?

In our February podcast on You Only Live Twice, we mentioned that Dwayne Johnson’s grandfather, Peter Maivia was in that movie.  (He was the guy who carried Bond in from the car into Osato’s office, where a fight ensued).

In an interview with Esquire, Dwayne Johnson talks of his desire to be in a James Bond movie, like his grandfather, although not as a villain.   As Johnson put it: “And I would like to follow in his footsteps… and be the next Bond,” he admitted. “I don’t want to be a villain. Gotta be Bond.”

We have one more James Bond item at the end of this newscast.  If you’ve seen No Time To Die, you’ll want to check it out. We have it at the end in case you haven’t seen the movie and don’t want any spoilers.

We’re intrigued as this movie is one of those movies that has been panned by critics, but fans supposedly are eating it up.  Red Notice has a 35% TomatoMeter rating on Rotten Tomatoes, but has a 92% audience score, although only a 72% when including all audience ratings.  The TomatoMeter rating is based on what percentage of verified critics gave a movie a positive review.  The audience score requires a 3.5 or higher rating.

So, why does a movie with these types of reviews, get this good of audience ratings?  Well, having three box office stars has to help a lot. Also, it isn’t a terrible movie, just not a great movie.   If you already have a Netflix subscription there is no additional cost to stream it.  We saw it in the movie theater initially and that was a mistake in our opinion.  While it is fine to watch it at home, we would not subscribe to Netflix just to watch this movie.

Is there a Red Notice Prequel, Or Two, In The Works?

Ok, in looking at these numbers, this shouldn’t come as a surprise.  In an interview on TheHollywoodReporter.com, director Rawson Marshal Thurber comments about a possible sequel to Red Notice.

Red Notice had a price tag approaching $300 million which is why it was the most expensive Netflix movie ever.  Universal jettisoned this project as the costs escalated.  A big part of the high costs is the fact that it has three stars on it.  As Thurber says “The above-the-line number is very, very high. When you make a Mission: Impossible, let’s say, you have one Tom Cruise. We’ve got three Tom Cruises in this movie.”  Additionally, he says that the costs of the masquerade ball escalated quickly due to filming changes due to the pandemic. “we had to shoot it in layers, in plates, and stitch those pieces together. That is why the budget went up. We started the movie with 400 visual effects shots — it wasn’t a visual effects movie at all — and ended with 1,500 or so.”

So, as for a sequel to Red Notice, Thurber says “I think that is a real possibility. If we were to make a sequel, the only responsible thing would be to make two and three back-to-back. It’s such a big production, and if you can mount it one time, it will be better for everyone. Including for my mental health.” So, maybe there will be two.  We’ll see.

The upcoming movie Section Eight has added Mickey Rourke to the cast. He joins Dolph Lundgren, Scott Adkins, Ryan Kwanten, and Dermot Mulroney in the cast.   According to an article on Variety.com: “The movie is the story of a former soldier who, after avenging the murder of his family, is sprung from prison and recruited by a shadowy government agency.”

Ok, so this technically isn’t a spy MOVIE, but Netflix has cast Gabriel Basso and Luciane Buchanan in lead roles for the upcoming series “The Night Agent”.  This is a political thriller based on the novel with the same name, written by Matthew Quirk.  Basso plays a low-level FBI agent who mans an emergency hotline for American spies.  Oh yeah, he does this in the basement of the White House.  This could be an interesting series.

A Spy Among Friends

An article on Variety.com takes a first look at the upcoming streaming series, “A Spy Among Friends”. Damian Lewis and Guy Pearce will star as Nicholas Elliott and Kim Philby in the series based on the book of the same name.  Elliott and Philby were real spies and good friends at the height of the Cold War.  Sometimes friends betray friends as we’ll find out here.  This show is expected to be available via streaming in the fall of 2022.

Tom Cruise did what?

It’s a topsy-turvy world that Cruise lives in.  An article on dailymail.co.uk shows pictures of Tom Cruise filming a scene for Mission: Impossible 8.  In the scene, Cruise hangs upside down from the wing of an airplane.  It was a 1941 biplane. We’ve seen wing walkers before, but never with the star doing the stunt.  Mission: Impossible 8 isn’t set to hit theaters until July 7, 2023, so we have to wait a while to see what this looks like in the movie.

You can wait forever and you’d never see me do this stunt – or most anyone.  Kudos to Cruise for doing this one.

We also are saddened to hear of the loss of Peter Aykroyd. Best known for his work as a cast member and writer on “Saturday Night Live”.  Yes, he’s Dan’s brother but he showed that talent runs in the family.  In the spy movie world, Peter performed and wrote the song “Rock the house Down” for Spies Like Us.

So, this is why we had the ending in No Time To Die

We’re closing with this topic as it contains a spoiler for No Time To Die.  End the podcast now if you haven’t seen the movie and somehow avoided spoilers. You’ve been warned that this is a spoiler.

An article on digitalspy.com talks about how Daniel Craig asked that when he left the franchise, that Bond would die.   This is according to Paul Duncan’s new book “The James Bond Archives: No Time To Die.”  Craig is quoted as saying “I would like to be killed off when I’m finished”.  If that’s true, that is one hell of an ego on Craig.  It also means we have to apologize to Purvis and Wade.  We’ve been harsh critics of their work. What they did in creating the sappy Bond we saw in this movie is not excusable. However, it looks like the ending wasn’t theirs.  Why Barbara and Michael would go along with this for 15 years is beyond us.

It’s just hard to believe that an actor who was just taking over the role would want the character killed off when he was done. He hadn’t even done Casino Royale at this point.  Plus it makes his comments about not wanting to do another Bond movie after Spectre seem even more shallow. 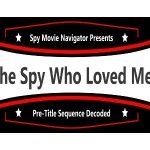 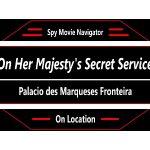