Goldfinger & Bond at Stoke Poges - This clip is about 5 ½ minutes long, but it highlights what will become the mission for the rest of the film.   It establishes Bond as a person of interest for Goldfinger since he has access to some rare gold bars.  This clip is not the sharpest in terms of quality, but it was the best we could find at this time on YouTube.  This clip reinforces the tension and adverse relationship they have.  As Bond wins the round and the 5,000 pounds that the gold bar was worth.  That's the bet Goldfinger made with Bond after he saw the gold bar, and Goldfinger is not happy. Once again, you will notice Goldfinger is wearing a golden sweater as he plays his round of golf with Bond.   He is almost always wearing something gold throughout the film.   Once you pay attention to it, you will look for it! We know that Goldfinger likes to win – and here he loses to Bond.   And he must write him a check for the 5,000 pounds.   Goldfinger’s Rolls is parked in front of the main building at the club.  Here, he directs Oddjob to demonstrate the capabilities of his hat, knocking the head off a statue some distance away.   We now know that Oddjob is physically strong, but has a hat for a potent weapon, which we will see used in key scenes later in the film.

SpyMovieNavigator On Location at Stoke Poges Club, where these scenes were filmed

ON THE FILMING LOCATION: On a recent trip to London, SpyMovieNavigator took a trek out to Stoke Park, which is where they filmed these golf scenes.  We actually had lunch at the restaurant - and it was fun - a high tea!  Then, we walked out by the 18th hole, got some great photos,  This is where Goldfinger concedes the game to Bond (after Bond replaced Goldfinger's ball with the wrong one - "stick rules!" After that, we walked in front of the main building where the Rolls was parked, and where Bond, Oddjob and Goldfinger met after the match.  There, Goldfinger writes the check to Bond. And here, in the film, is where Oddjob demonstrates his skills with his hat - knocking off the head of a statue.   Here are a couple of pictures including the driveway in front where Goldfinger's Rolls is, with Bond, Oddjob and Goldfinger, Dan in front of Stoke, and Dan and Tom in front of the famous 18th hole! [caption id="attachment_1604" align="aligncenter" width="300"] 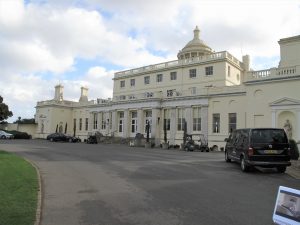 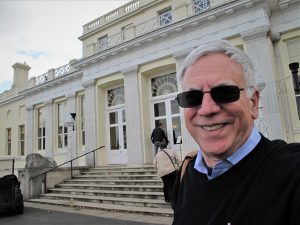 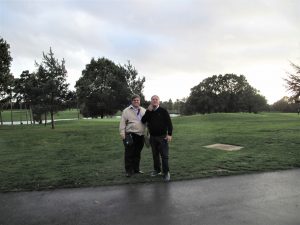 Stokes Poges- Dan and Tom in front of the 18th green, where Goldfinger concedes the game![/caption] Again, we were really excited to be at these filming locations!  Especially for these great scenes in one of our favorite Bond movies  - we were right there!  We love going to spy movie film locations, and we encourage you to do the same.  It is just fun to be where they shot these scenes.   And when you watch the movie again, you can‘t help but say, “I was right there!”

Goldfinger Golf Scene In the Movie: Royal St. Mark's is where they say they are playing. In Reality: Stoke Poges Club, at Stoke Park, north of London

As a reminder, Goldfinger likes to win, and here, he lost again to Bond.  So this cannot be good for Bond.  This Goldfinger golf scene is one of the classics in spy movies. In the movie, the golf match takes place at the Royal St. Marks’ (which was based on the Royal St. Georges).   In real life, it was filmed at Stoke Poges Club, at Stokes Park, which is about 35 minutes outside of London (Buckinghamshire) and is a luxurious resort and spa.  Fabulous grounds, building, etc., founded in 1908.  One of the most expensive clubs in the world!  Fleming was a decent golfer and played at Royal St. Georges, and was especially fond of the 19th hole!  Fleming’s handicap was 9, which coincidentally is the handicap of Bond. And in the film, Goldfinger has the same handicap, as the starter says in this clip. In the film, we all know that Goldfinger plays a Slazenger 1, but Bond switches his ball with a Slazenger 7 when Goldfinger ends up in the rough and can’t find his ball, but Oddjob sneakily drops one.   Bond finds the real one, and also a Schlesinger 7.  Bond hides the Slazenger 1 and switches Goldfinger's ball by tossing him the wrong one from the cup.  We can believe that Goldfinger might not notice since a 7 and a 1 might look similar at a quick glance.   But what ball does Bond Play?  A Penfold Heart!  This Goldfinger golf scene is a must-watch.