Red Grant Kills Foreign Agent - Tatiana obviously got the plan of the consulate and will leave it at the Aya Sofia as Bond had suggested. The Blue Mosque is seen in the background as Tania approaches Aya Sofia.

One of our colleagues visited Istanbul and we have a couple of shots of the interior of Aya Sofia that appear in the movie, with Blue Mosque in background.  You can see this all inthe movie clip. Here is the Blue Mosque, which appears in the background as Tanya, then the Bulgarian spy enter Aya Sophia. [caption id="attachment_3092" align="aligncenter" width="300"]

Blue Mosque , in Shown in Background in clip as Tanya, then Bulgarian spy walk into Aya Sofia[/caption] Here is a shot of the two columns and archway that the tour group walks past near the beginning of the clip. [caption id="attachment_3096" align="aligncenter" width="300"] 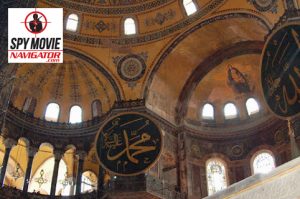 Tour group in clip walks past these columns and archway.[/caption] Once inside Aya Sofia, in the clip, Tanya is standing right where we indicate with the yellow arrow! [caption id="attachment_3093" align="aligncenter" width="300"]

In the clip, when Tanya walks into Aya Sofia, she is right where our yellow arrow is indicating! We were there![/caption]

We see more intrigue here - nothing goes quite that simply in a Bond movie. You will see some familiar faces we saw at the airport when Bond landed in Istanbul. Remember, Tania is leaving the plan for the Consulate in a small container for Bond. But one of the guys we saw at the airport, is tracing her and goes to retrieve it before Bond. Note that there is a tour group going through Saint Sophia, led by a guide who is telling them all about the history of the columns they are seeing and more.   Reports are it was a real tour group!  EON Productions and the writers are brilliant again.  This is a tense scene, and Bond is hoping that Tania and he can pull this off .  Can she leave the plan, and can Bond retrieve it unknown to anyone. While Tania is about to hide the plans near a column, the tour guide is pointing out a particular column, the "wishing column" where tourists have come for centuries, pacing their right hand and middle finger in the hole, making their wish.   No coincidence that he is saying this as Tania is hiding the plans, and Bond is wishing all goes well with this plan.   Once again, something happening as a backdrop is meaningful to what we see happening on the screen.  Simply and elegantly done.

But he is killed by the other man we saw at the airport following Bond – later identifying himself as Red Grant. But he does not take the compact container – why not? Remember, this is a complex plan – Tania thinks she is working for the Russians, and Klebb and Shaw have other plans. They want Bond to get the plan. And this all comes out in this scene. And you can still visit Aya Sofia and it is exactly the same as it was in the movie!