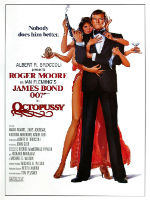 Octopussy was the 1983 installment of the James Bond series, starring Roger Moore as Bond.

An agent dies with a Fabergé egg which leads to an operation to unearth Octopussy’s (Maud Adams) smuggling operation.  This operation was a cover for a planned nuclear attack.

Louis Jourdan gives a strong performance as Kamal Khan, the lead villain in the movie.   Khan is supported by his henchman Gobinda (Kabir Bedi).  The soviet contingent is lead by Orlov (Steven Berkoff).

Much of this movie was filmed in India, bringing the Bond audience to another exotic location. The pretitle scene with Bond flying a micro-jet were filmed in Utah in the US.