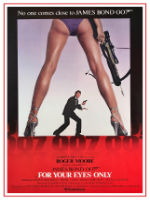 For Your Eyes Only was the James Bond movie released in 1981. It stars Roger Moore, returning in the role of James Bond.

James Bond needs to find a device called Automatic Targeting Attack Communicator (ATAC) which was in a submarine that had sunk.  The soviets find out about the missing ATAC so a race to find it ensues.

Bond must also deal with a man named Milos Columbo and one named Kristatos.  One of these men is an ally and one is the enemy.  James Bond must figure out who is the ally as he isn’t sure for a while in the movie.