Dr. No Intro Poster  - For Dr. No, this is one of the publicity posters used to promote the movie.  Also, you will hear the theme song music first associated with the EON Production James Bond films! EON created a masterpiece and a James Bond franchise that has thrived for decade.   And Dr. No is the first film they produced.

Our Dr. No Poster Analysis

By 1962 when the film version of Dr. No is released, Ian Fleming’s books featuring the cold war secret agent and Bon Vivant, James Bond were all the rage. The public was hot for a no holds barred film that would introduce a real flesh and blood Bond. The film poster for Dr. No features Bond as the dominant figure slightly off-center with a smoking gun in one hand and the signature sixties symbol of cool, a cigarette in the other, signifying a controlled relaxed man of action. The bright yellow background is like intense sunshine referring not only to the movie’s exotic tropical Jamaican locale, which is further depicted by the simple inset line drawing of palm trees, but also to the heat of passion promised by the four sexy female figures each in various stages of undress and striking provocative poses. The presumed title character of Dr. No is mysteriously cut in half and barely makes it on to the poster’s left edge. It is clear that he is not the hero of this film in spite of the name. Interestingly the evil Dr. No is dressed in white while Bond is in a very dark blue suit which belies the standard code of cinema that the good guy always wears white while the villain is traditionally in black. As such, this signals the upside down and unpredictable world of espionage where things are not always what they seem.  Therefore,  it is impossible to rely on your previous experiences. The bright red text shouts out what is possibly one the shortest movie titles of all time and announcing the all-important fact that this is THE FIRST JAMES BOND FILM!

Ian Fleming on the Poster

Note Ian Fleming’s name is also in red making the point that this is based on his already well-known books and setting the stage for his branding empire. There are few films particularly up to this time that feature the book author’s name. In most cases, you will be lucky to find a short line in the credits that says something like “Based on a book by…”  Saying that a movie is based on a book is a signal that this film has an added level of sophistication and worthiness. It might be action-adventure and it might be sexy but it is based on literature. This is an important distinction in this time of changing morality of the 1960s and the changing morality in film. It might also be argued in this case that it is based on what many considered a book in the realm of pulp fiction.   And so,  in that way promised to be a little edgier or forbidden. Men wanted to see sexy women on the big screen.   And women wanted to be the desired liberated and strong women Fleming portrayed.

The Women On the Poster

It’s important to note the women in this poster are not victims or being controlled in any way. The posture of the second figure from the right is a classic power pose.   She is using her sexuality to lure you towards her but she is not cowering or submissive. The next figure almost dead center is barely nude with her back toward you but very much aware of who is behind her and again is drawing you toward her and very much in control. The sexy two-piece white bikini worn by Ursula Andress will become the iconic symbol of the sexual revolution.  And was quite scandalous at this time. But again notice her hip thrust out indicates that she is in charge of her body and the situation. The poster designer Mitchell Hooks manages to give the budding film star, Sean Connery, prominence though he is still dominated by the author Fleming. Note he is billed as playing the part of “007” a man referred to as a number which was a symbol of the nascent computer age. Is the number seven lucky? Maybe so. It is important to keep in mind that for many theatergoers this was their first introduction to this man, James Bond.  And he will become an icon and a symbol of cold war espionage, as well as the symbol of the post-WWII “modern” male .  And, soon to be movie icon.

Thanks to our Colleague Reno Lovison

SpyMovieNavigator would like to thank our colleague, Reno Lovison, for this comprehensive poster analysis.   Reno does video production and podcasts on a variety of topics and can be found at renoweb.net. And we’d like to add a couple more notes:

This Dr. No clip is one of the most critical and important scenes in the entire James Bond 007 franchise  The interaction between Sylvia Trench, in red, and James Bond at the baccarat table at Le Cercle at Les Ambassadeurs in London sets up the entire Bond.  James Bond scenario in the films.   For the very first time in film history, Bond says his name like this. And Sylvia Trench is truly the first Bond Girl.   So this clip is one of the most important clips in any James Bond 007 film.  Bond, in this the scene,  receives word that he must leave and head to Jamaica to investigate deaths of J branch MI6 members.

Here, Bond is in Le Cercle at Les Ambassadeurs in London.    We visited Les Ambassadeurs in London – we could not get in as it is private, but we were at the doorway,  awning, and sign, which is the establishing shot for this scene in Dr. No.  Very cool building and the security guys were nice to let us take some pictures.  We were on the steps of Les Ambassadeurs, knowing what an important role this place played in the Bond films!  We were there on a pleasant day, and the the entryway was elegant.  It was Bond, and we were standing right there!  And guess what?  So was Fleming once! As an aside, Cubby Broccoli, who along with Harry Saltzman were the original producers of the Bond films, set up a meeting once at Les Ambassadeurs for Fleming and Irving Allen to talk about maybe turning the Fleming Bond novels into movies.   Allen was not impressed and told Fleming the stories were not even good enough for television.   So we were standing at the door where Fleming walked through for this meeting!  Take a look at YouTube at the “Dr. No Documentary” – a very detailed story on how Bond got to the movies, written and directed by John Cork. We see Bond here as cool and elegant.  Again, in the “Dr. No Documentary” by Cork, it comes out that a stylistic decision was made by Terrence Young and the writers: to take the elegance, wit, and sophistication of Fleming’s writing and infuse James Bond with those characteristics.  And forever, Bond is cool, elegant, witty and sophisticated.   Check the documentary out at – we have links on our website to it  https://youtu.be/8ZPjEYxymgE 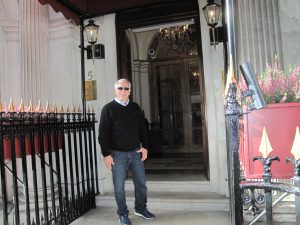 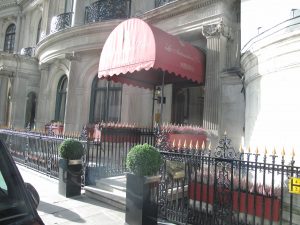 Les Ambassadeurs in London - awning, and entrance. We were able to get some pics at the doorway and more![/caption] This scene is exceptional.  We see this fancy club, we see people sitting at the chemin de fer table, meticulously dressed.  A lady in red, and several others sitting around the table, are enjoying this aspect of their lives.   And there is a gentleman across the table from the lady in red, in a tux.  You see only his sleeves, hands, chest.  She is losing and he is winning.  Who are they?  Will their lives entwine?

Miss Trench loses more money, then asks the house to cover, and then writes a check out for more money.  At which point the gentleman in the tux says, “I admire your courage, Miss. . .”  To which she replies, “Trench.  Sylvia Trench.  I admire your luck, Mr...?”   To which the gentleman in the tux replies coolly, while lighting a cigarette: “Bond.   James Bond.”  This is the first time in Bond movies we see Bond and hear the famous line, “Bond.  James Bond” and we are now set up to hearing this for all of time.   Who in this world does not know this line? From this scene, we know absolutely Sylvia Trench will be the first Bond Girl.

How do we know that Sylvia Trench will become the first Bond girl?   Because of several overlooked clues that she gives us in this scene.  Want to know what to look for?  Well, let’s look into this together right here and right now. Its movie origin is right here in Dr. No – and now forever, he is Bond.   James Bond.

And now, we get a good glimpse into James Bond’s lifestyle – he is at a private club casino, playing chemin de fer in a tuxedo.   What a lifestyle that we all look at and admire, wish for, long for – can we be, in some small way, Bond.   James Bond? We will see a further glimpse into Bond’s lifestyle when he says to Miss Trench a bit later, “You’re out to get me” and she replies, “that’s an idea.”  Bond gets interrupted by a message that he must leave (to go back to MI6, to discover his next mission).  Miss Trench gets up as well and they stroll out together.  They will meet again, as Bond hands her his card and says, “My number’s on the card.”  Very cool. And in fact, we do see Miss Trench later in Dr. No and again in From Russia With Love.   Sylvia Trench was played by Eunice Gayson, who passed away in 2018 – the first Bond girl to pass away.  She played it well.