Join us as we’re Cracking the Code of Spy Movies – In the new No Time To Die trailer that aired as an ad during the 92nd Academy Awards on February 9th, several new things are revealed, so let’s take a quick look.

We’re just going to look at the differences in this new trailer versus the original trailer and the second Official Game Day Spot ad.

It begins with Bond and Swann in an embrace, and she whispers to him, “This is it.” And he echoes back, “This is it.”   Yes – we are left wondering WHAT is the IT, and why is it happening now?   But we do not know – they tell us no more.   Or do they?

Next, you see Bond standing in what looks like a hilltop graveyard.   There are mausaleum–type burial vaults in front of him – or is this a church and a churchyard?   The very next shot is Bond’s hand (yes it is Bond’s hand) – he is wearing a tan suit with a blue shirt while embracing Swann (you see the blue-collar above the jacket from the rear) and Bond is holding a note, with a crest on top, some indecipherable printing on the bottom, and the hand-written words: “Forgive Me”. And Bond is holding the note with his right hand and lights it afire with his left. 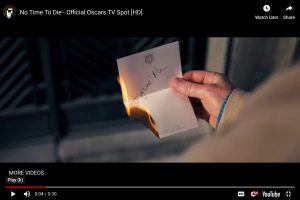 OK – this is big. WHO is the note from?   Is this another one of Bond’s loves gone bad, like in Casino Royale? Remember in Quantum of Solace when Mathis, while dying, tells Bond to forgive her (Vesper) and to forgive himself? Is this note along the same lines? Is it from Swann?   She did something that she now regrets, and wishes Bond’s forgiveness, much like Vesper? Or is the note from someone else?   Probably not from Safin – he seems to be the evil one.   Probably not from Blofeld. He predicted when her secret came out it would be the death of Bond (we think). From Felix Leiter? Did Felix betray Bond in this entire mission, setting him up? Wow – that WOULD CHANGE EVERYTHING.  This note is the most intriguing element in this entire 30-second trailer.   Whoever the author is will reveal a large chunk of the No Time To Die saga.

Let’s get back to the shot of Bond standing in the cemetery or churchyard.   He is looking down at what appears to be a tall burial vault, with what appears to be dried up flowers strewn on the ground in front of it – indicating the death and burial was not just moments ago. But when you blow the picture up, it looks like the flowers may be rather fresh – there are still visible heads on the flower stems.   WHO is buried here? Is Bond lamenting another loss of a key loved-one? Swann? 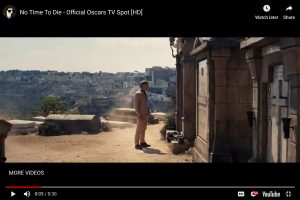 Again, in terms of arc, we know he lost Vesper in Casino Royale, and realized in Quantum of Solace, that Vesper did not betray him but died for him.   We do not know in this reboot if he has been married yet – to Tracy – from On Her Majesty’s Secret Service.   But, here Bond stands, with his hands at his sides, looking down, perhaps at an inscription, on the stone. Generally, when one stands with his or her hands at their sides, it means they are not going to fight – is Bond just giving in here, not fighting what has happened? Accepting it? Or is he destroyed by it?  He looks sad in this shot. His head is slightly cocked downwards. In body language, if a head is cocked downwards OFTEN is a sign of submission. IT can also mean, because you are exposing the hardest part of your head as animals do, that you expect a fight – but combined with your hands at your side, it may mean conflict. Like, “I want to give up but there is another battle ahead.” Which maybe is the conflict he has suffered the entire film, having been in retirement (stepping down or quitting) and then getting drawn back into the battle. Regardless, in this shot, Bond is feeling stressed, conflicted – it certainly is not boredom.   He may be anticipating something big that must still be done. Or it may indicate that he is truly finished – defeated. But . . . this is BOND!

Also notice in this shot, Bond’s left foot is slightly ahead of his right foot – sometimes that is just comfort, but sometimes it may indicate the direction in which you want to head – here, it could be into the grave of whoever is buried there – which may indicate he loved and misses this person so much. Wow – a lot in one shot!

Next, let’s look at still another verbal confrontation with Safin and Bond.   We remember in the first trailer Bond telling Safin, “History isn’t kind to men who play God.”

Here, we see a quick shot of Bond in a tux with people all around him – they almost look like that are backing out of the way to make room for Bond to walk through this crowd – most of the people look rather stern, but the woman on the right of the screen seems to be smiling (or is it sneering) looking strat at the back of his head – and Bond looks intense.

A second later, in this trailer, Safin says to Bond, “James Bond. I have made you redundant.”   That’s a British term that basically means, irrelevant, unnecessary, unneeded.   Like when someone gets fired from their job, the Brits say “your job has been made redundant.” It is a form of dismissal. So, in a powerful statement, Safin says this to Bond. But Bond quickly retorts, “Not as long as there are people like you in the world.” This indicates that Bond believes the fight must go on – again, we do not know the sequence of the actual clips (or if they are all really in the final cut). Was this after the graveyard scene? Before it? All this is important as well. Both Safin and Bond seem confident in their statements in this short clip. Notice Safin’s head is cocked backward, indicating confidence.   Bond’s is straight ahead – eyes blazing, shifting it in a “no” fashion when he says the words “not as long” – cocky and confident that he is right – that good will defeat evil in this world, and the fight will go on. 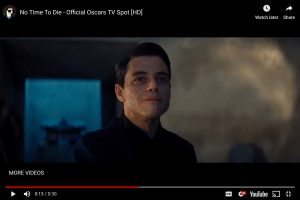 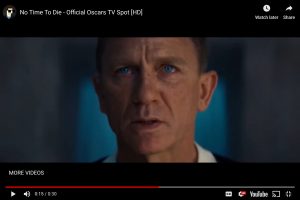 We see the words, again, THE 25TH FILM . . . WILL CHANGE . . . EVERYTHING. In between, THE 25th FILM . . . WILL CHANGE . . . we see a very short shot of a bare-chest Bond and what appears to be a clothed Swann, embracing – with a possible explosion in the distant background, and torches or lights burning closer to them. When in the sequence is this shot? Why is Bond bare-chested?   What IS going on in the background? The typical James Bond film ending with the villain’s lair blowing up and burning? We do not know.   But look closely at this image – at 21 seconds into the trailer.   What do you think it reveals? 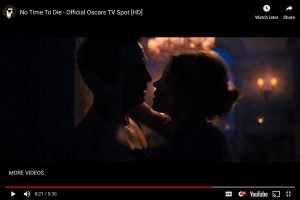 Now we see the word EVERYTHING completing the prophecy that THE 25th FILM WILL CHANGE EVERYTHING statement.

Then a close-up of M, saying, “Come on Bond.” M seems concerned and wanting Bond to succeed. Then Bond and Nomi shoot out of the plane as we saw in the Official Game Day Spot trailer – in the glider with wings expanding after the craft is ejected from the plane.   Then the title No Time To Die again etc.   Wow!

Again, another teaser trailer doing exactly what it should do – make us speculate and wonder and want to see the film.!   Great job Eon Productions!

We have a podcast covering all of this as well so take a listen.   We have had out podcasts downloaded from 44 different countries so far! Join us in Cracking the Code of Spy Movies in all of our podcasts and videos, and on our website. Follow us on Facebook, Instagram, and Twitter and let us hear from you! We may include your comments on our show!