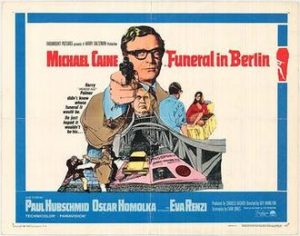 Join Dan and Tom as they head to Germany to attend the Funeral in Berlin!   This 1966 movie is the second installment after The Ipcress File, with Michael Caine as Harry Palmer, based on Len Deighton’s novels.  Part 1 of 2.

Lots of Bond connections, quips, key scenes are explored from a fresh angle.   If a funeral could be fun, this is it!  Join us, wont you?