We have recorded this article as a podcast.  If you want to watch it,  click here.

This article will update the status of the movies The King’s Man, Tenet, Black Widow, and Red Notice.  We last talked about these movies in this article from April. We’ll also look at a couple of industry changes that will likely have an impact on movie going for the foreseeable future.

(currently set for and August -September release depending on the location)

So, let’s start with Tenet.   This is the Christopher Nolan movie which is supposed to be the first tent pole movie released in the US during the pandemic.  What happens here will have ramifications for the industry as a whole.

The release has been pushed numerous times as the movie industry is trying to figure out how to release a movie safely during the pandemic and in a manner in which consumers will still go to a theater.

According to an article by Tom Brueggmann in Indiewire, the current plan for Tenet is a UK release date of August 26, 2020, and in 50 other territories between the 26th and 28th. China’s release date is still unknown, but the movie has been approved there. It will have a US release on September 3rd in select theaters.

Currently, 45 states in the US permit indoor theaters to operate with some restrictions/safety precautions.  Cinemark, Regal, and AMC all have opening dates scheduled by the end of August with wide releases starting on August 21st.   Warner Brothers is re-releasing Inception as well.   From what I’ve read, you should probably watch Inception again before seeing Tenet.  So, as Brueggmann’s article states “even if California and New York couldn’t open and a few other areas besides, more than 80% of the population would still have the potential to see Tenet in an indoor theater.”   We’re eager to see how many people will actually go.  As Seth Rogan said about Tenet in an interview with The Hollywood Reporter: “For a while, it seemed like the answer was to kill his greatest fans,” Rogen told THR. “But that’s not the answer of today, it seems, so that’s good. But we have no idea. We don’t want to be the first to rush into anything.”

We here are SpyMovieNavigator are watching this closely.

(Currently set for it’s US release in September)

The next spy movie scheduled to be released is The King’s Man, the prequel to earlier Kingsman movies.  This is still scheduled for a September 18, 2020 release date in the US.  We can only imagine that what happens with Tenet will have a huge effect as to whether this date changes.

In an article on this prequel on movieweb.com by Jon Fuge,  Director Matthew Vaughan said that this prequel will lay the foundations for Kingsman 3. Vaughan says: “We’ve put seeds for what’s going to happen in Kingsman 3 all the way back into this. And it’s going to be very different.”

So, while The King’s Man is a prequel it is being used to set up Kingsman 3 (this sounds like Star Wars numbering here).   What I would have called Kingsman 3 is this prequel, maybe you can think of it as Kingsman 1?  Thus the 4th Kingsman movie would be Kingsman 3?  My head hurts when they do stuff like this.

In industry news, two big recent announcements may change theatrical releases for a long time, one by Disney and one by AMC and Universal. Will Black Widow be affected by these announcements?

DISNEY WILL RELEASE MULAN ON DISNEY+ AND NOT IN MOST THEATERS

The first is an acknowledgement of the impact of the COVID-19 pandemic on the movie business.  Disney announced last week that Mulan will no longer have its initial release in theaters.  Instead, they will be releasing it on September 3rd on Disney Plus, but not as a regular part of the service.    In addition to the monthly $6.99 Disney Plus monthly subscription price, if you want to see this movie, you can rent it for $29.99. It will be released theatrically in markets in which access to Disney Plus is not available.  That means you can see it in a theater if you are in a country that doesn’t have Disney Plus.

Initially, we were surprised by the price point.   However, after doing some research, we think the $30 rental price is a fair price for a family movie.   According to Statista.com, in 2019 the average ticket price at North American movie theaters was $9.16 with AMC coming in higher than that.   Let’s make the math easy and call it $10.00 a ticket.   A family of 3 would spend $30 just to see the movie in a theater, not counting the prices of any food and drink you might get.  So the $30 price point seems reasonable.

Assuming that same number of people who would have gone to the theater buy into this, Disney will make more money than if this was in a theater.   A 2016 article on theweek.com says that US theaters end up paying the studios somewhere around 60% of their proceeds from the box office, up to 90% for a first-run movie.  So to Disney’s bottom line, they would net about the equivalent of just under 5 people going the theater to see the movie at the 60% number. Plus, you need the Disney Plus subscription.  Given the estimate of over $1billion in the expected global box office, this has to really hurt theaters.

According to an article in Variety, Disney CEO Bob Chapek says that this is a one-time event.  “We’re looking at Mulan as a one-off as opposed to saying there is some new business windowing model that we’re looking at. “

This quote by Chapek is intriguing as Black Widow was pushed back from May 2020 to November 6, 2020, in the US.  MCU fans are now asking Disney to do the same release to Digital strategy for Black Widow as Disney is doing with Mulan.  We’ll see if the “one-off” is a reality or just too good a deal for Disney to not make part of its release model.

UNIVERSAL AND AMC KISS AND MAKE UP

The second bit of general movie news is that prior to this Disney announcement, Universal and AMC made a deal to try to quell the fears of straight-to-digital killing the movie theater market.  After Universal released Trolls World Tour on digital on the same day as theaters after the pandemic hit, AMC banned Universal movies from its theaters.   This new deal mends that fence. Universal movies will be in AMC theaters exclusively for at least 3 weekends or 17 days, instead of the old model of 70 days.  Universal can keep a movie exclusively in theaters for longer than that, but 17 days is the new minimum.   Movies will hit the digital marketplace much sooner, but AMC can still survive on the new release.

An August 4th article on CNBC.com by Sarah Whitten talks about how Cinemark and Regal which combined have more theaters than AMC don’t have, nor do they want this deal AMC struck.  So this might get interesting.

It’s also interesting when juxtaposing this news with the Disney news which happened a week later.  First, as we said, a theater may have to pay up to 90% of a first release’s box office to the studio.   At 17 days, they won’t be able to make that much profit from the movie before they lose exclusivity.  Now, they may be able to keep the movie in the theater while it’s available on digital . And I assume they’d have to pay Universal much less than 90% once digital becomes competition.

That said, I’d rather see Black Widow, The Kings Man, or No Time To Die on a big screen.  They are visual movies.  So, let’s hope this deal helps theaters stay afloat in these changing market conditions.

Second, with Disney charging for Mulan separate from their subscription pricing, how can movie theaters compete with this?   We’re assuming this “one-off” isn’t going to end up as a one-off and Disney does this more often, and possibly with Black Widow.   How will the movie theater chains react?

Times are changing and it is not just because of the pandemic.  The combined effects of digital distribution with the impact of the pandemic are likely to change the movie industry to a large degree. We think the studios want to accelerate the move to digital and the pandemic is giving them the excuse to do so.  So stay tuned, we’ll keep you posted.

Finally, the release movie called Red Notice has been pushed to 2021.  It doesn’t have a release date yet.

So, there you have the latest news on the current state of spy movies for 2020.  We’ll be shocked if it doesn’t change again with the pandemic. But we hope we get to see at least a couple of these movies this year. 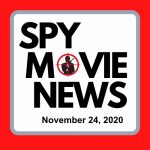 This mid-November edition of Spy Movie News discusses news on the spy movies NO TIME TO DIE, MISSION IMPOSSIBLE 7 & 8, RED NOTICE, and more.

Join Dan Silvestri at SpyMovieNavigator.com as he discusses the mid-November news on the spy movies NO TIME TO DIE, MISSION IMPOSSIBLE 7 & 8, RED NOTICE, and more.

The Spy Movie Database Is Being Updated

The Spy Movie Database is currently down starting at 10:00 Central US time (GMT -6), Sunday November 22 for an upgrade.

We are updating the database to include the content from the newly updated book, “The James Bond Movie Encyclopedia” by Steven Jay Rubin. We’ve included new, updated content. Plus, we’ve linked the terms in the articles to make it easy to drill in to whatever you are looking for.

We anticipate the update completing by 3:00am Central time on Monday, November 23rd.

We apologize for any inconvenience, but we are sure you will like the upgrade.

Pinewood Studios construction manager, and production designer Ken Adam’s right-hand man on many of the early James Bond films. Udell’s motto, which Adam took literally, was “If you can draw it, we can build it.”

Shapely actress who portrayed Linda, the bored jet-setter whose "drop-in" yacht guest turns out to be the new 007 (TIMOTHY DALTON), in The Living Daylights teaser.

Beautiful city on the subcontinent that became a principal filming location in Octopussy. Founded in 1559 by Maharana Udai Singh II, it is known as the City of Sunrise. Shooting began there on September 21, 1982, and continued for three weeks.

The amount of time 007 (SEAN CONNERY) has devoted to the unusual war games conducted by M (EDWARD FOX) in Never Say Never Again. M claims that Bond's record is suspect. After all, he was killed once. On another occasion

The amount of free heroin Dr. Kananga (YAPHET KOTTO) plans to distribute through his chain of American Fillet of Soul nightclubs in Live and Let Die. The shipment has a U.S. street value of $1 billion. The impact should put his competitors

Plastic surgeon who designs the Blofeld clones in the Diamonds Are Forever teaser, portrayed by DAVID DE KEYSER, who dubbed the voices of actors GERT FROBE and GABRIELE FERZETTI for previous Bond films.