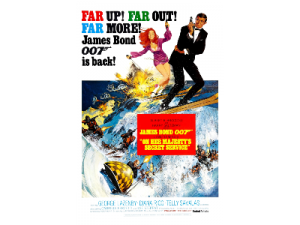 James Bond falls in love with a beautiful women, Tracy, the daughter of mob boss, Marc-Ange Draco.  Along the way, he ends up in Switzerland tracking down Blofeld and his team of beautiful women.

We think this is one of the best James Bond movies. What do you think?

On Her Majesty’s Secret Service Podcasts:

A car chase, a fight on the beach, guns, knives, suicide, a new James Bond, a different Aston, a time machine, a Queen with a trident, and more in the pre-title sequence to the 1969 James Bond movie, On Her Majesty’s Secret Service!

Join Tom and Dan & special guest host Vicky Hodges (from the UK) as we discuss the gadgets in On Her Majesty’s Secret Service and Live and Let Die – and some Bond movie locations that have been visited and celebrities met!

Vicky joins us as a co-host on the show, and is an avid Bond memorabilia collector and knowledgeable James Bond and spy movie fan!  She’s great!