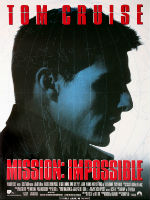 While the TV show of “Mission: Impossible” ran for 7 seasons (1966-1973) in the US, it then set-up the future ability for the Mission: Impossible movies to be made.  Back then, there were 27 episodes in a season, not counting the pilot in season one. The TV show, excellently executed,  won 19 awards and was nominated for 39.  A two-season reboot of the show ran from 1988-1990.

All totaled, there were over 200 episodes of the show.  Listen to our Mission: Impossible 1 podcast for additional insight and discussion.

So, how do you bring such a successful TV show to the Big Screen?  The answer to this question was to bring in one of the biggest box office names in Tom Cruise to play the lead character and add a lot of very cool stunt work.  So let’s get to our Mission: Impossible 1 curation and see what all the excitement is about!