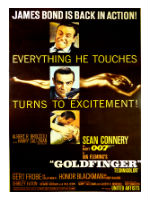 After successfully blowing up a drug lab in Central America, Bond needs a vacation.   So he heads to the Fontainebleau Resort in Miami Beach, Florida in the USA.  And so begins the Goldfinger – James Bond 007 saga.

We break down the movie, discussing the film and how it either was influenced by or influenced real-life events or other movies in this podcast.

In this curated movie section (and in the related podcast), we look at it as it related to other bond films before and after, and to many subtleties:

This is where Felix Leiter, a CIA agent who Bond is now friends with, tells him of a guy named Goldfinger.   He is involved with smuggling gold.  James Bond must monitor Goldfinger and find out what is going on.  So, he begins his investigation.  Discovering a secret plan that involves the gold in Ft. Knox, Kentucky, where the United States of America keeps its main gold supplies, drives Bond to his espionage limit.

As additional content, our related current on-site film location videos for Goldfinger, and related Goldfinger podcasts will add additional insight into this fabulous movie.  So, check them out!  Going head-to-head, Goldfinger – James Bond 007 is a great dueling match!

Based on Ian Fleming’s seventh novel (March 23, 1959),  EON Productions made this their third James Bond 007 movie (1964).   And we see the introduction of the Aston-Martin DB5,  which became the iconic James Bond car.  And, many consider this one of the best James Bond 007 films ever made, and we agree.